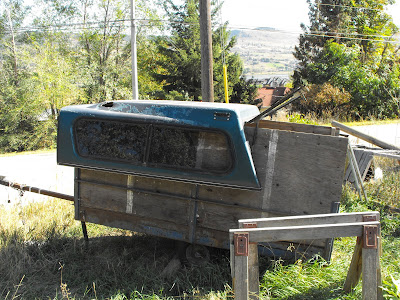 About a week ago I had Dan come over and help me to move the canopy off the utility trailer, putting it onto the flat deck trailer. I need to get some fiber glass and patch the hole in the roof of the canopy one day soon. I also plan to put it onto my truck in the next couple days, taking off the steel rack for the winter. Reba needs the canopy on now that the weather is getting cooler. I have it on it winter months for the comfort of my dog. 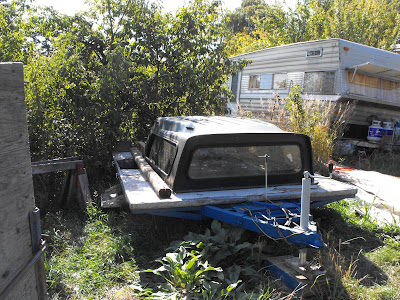 I hooked up my '92 Ranger to the utility trailer 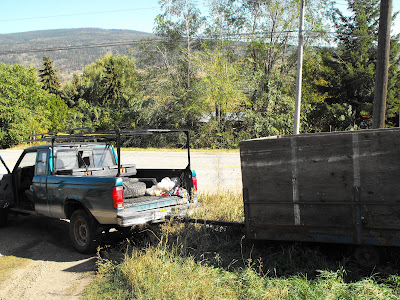 & moved it to the upper part where my home sits (my property is on a hillside) so I can put stuff into it to take to the dump.
Then I started up the 1989 Ford Ranger 4x4 I recently bought 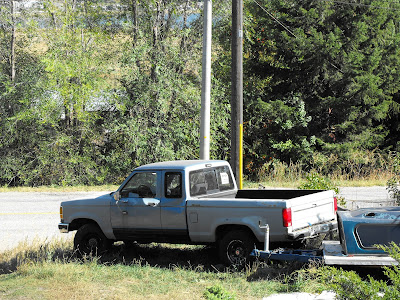 and moved it to where the utility trailer had been. 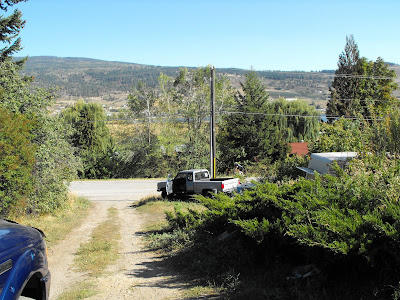 I bought this truck from a long time friend as he didn't need it anymore and I wanted some parts off of it. He tells me he did a bunch of work on it in the last 1 - 2 years: rebuilt front & rear differentials, front & rear brakes, and transmission. Also, he replaced the original box in the last couple years as the other one was rusted fairly badly. This one is in good shape and has lots of that spray coating on it to stop rust from happening.

I had planned to take this box off and put it onto my '92 because the box on it is rusted through one one side while still good on the other side. 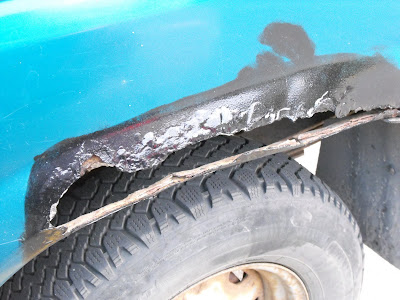 My friend Tuggy is a welder so I asked him how much he'd charge me to switch the boxes. He looked at the '92 and said it would cost less to fix this hole than it would to change the boxes as it is a lot less work for him to do it this way (cut rust out, weld new metal in, paint that area). So okay, that kills the plan to use that box on this truck. Oh well, I still want to switch the windows from the extended cab. You see, these 2 side windows in the '89 open while in the '92 they don't. Ya right. They are the same size and yet just a tiny bit different shape, so they can not be changed over. Drat!!!

I thought about keeping the '89 in case I ever need to replace a differential or tranny or whatever, but decided this is only a good idea for someone who can change the parts over themselves. By the time you pay someone to do the work it's just too costly to make it worth while. So now I want the '89 gone and to have my $$ back. Today I am putting it up for sale. This time of year it will be a great buy for someone who likes to hunt or fish (4x4), it's great as a work truck, or for someone who needs a vehicle and isn't fussy about it looking perfect, it would be good. It has a 2.9 Lt engine, 5 speed standard shift, so is pretty good on gas for a 4x4. All it needs, from what I have been told, is an oxygen sensor in the engine and all will be well. I think it would be a good buy for $800 for someone who can use it.
Written/Photographed/Posted by Alice (in BC Canada) at or about 10/04/2009 03:05:00 p.m.

Great buy if you ask me. I love the photos and the stories. Wonderful my friend. There's an award waiting for you HERE. Aloha my friend :)

Thanks, Thom. I think it's fair.

I have posted it to the local CheapCycle and have gotten 1 reply:
Hi!
If no one buys the truck, and you still want to get rid of it, I offer you $400. THat's the best I can do as I have 4 children and can't save much but would love this for my hubby whp really needs a truck to get us firewood for the winter.
THank you for considering,
Kimmy :0)

I wrote her back, thanked her for her email and said I would not go that low. Heck, I paid more than that just a couple weeks ago and it hasn't left the yard.

I'm going to put a sign on it and list it on Kijiji. Haven't gotten those things done just yet.

Having friends who know how to do the work one needs done is a wonderful and precious blessing!

Good luck selling the truck. I hope it goes quickly.

You really did a good job. Your truck really looks cool. Thank you for sharing your nice story.