November 11th is Remembrance Day here in Canada. It is the day when so many people stop to remember the world wars, and to remember the men and women who died in the wars. I think mostly it's WWII, though I could be wrong about that. Anyway, I believe that those who go to war do so either because they are forced to by their country, or because they want to fight for Freedom, and for Peace. I also believe that Peace can never be brought about through wars.

I asked Google when Canada entered into WWII. This is from WikiAnswer:

The UNITED STATES entered the war in December 1941. Europe, and Canada as a member of the UK had already been fighting it for over two years and Japan's invasion of China was even earlier.

Here is an alternate answer:

Canada declared war on Germany on September 9th of 1939, in response to the fact that Germany had invaded Poland the previous week.

The war lasted until August of 1945, almost six full years. Many of the young Canadians who volunteered in 1939 were out of Canada, fighting the Nazis for as long as that.

Remember that over 42,000 of them NEVER CAME HOME, and they are buried in foreign places that will be forever a part of Canada. There are Canadian War Graves Cemeteries in 72 different countries around the world. They died so that we can live in freedom, today.


Here are some photos I took of a red brick post office that was built in 1939, the same year as Canada entered into the war. I bet there were a lot of people sending and receiving letters and parcels to and from loved ones away at war. 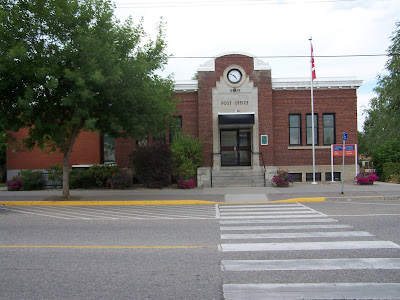 Instead of remembering the war, any war, or thinking about the people who died in the war(s), I choose to think about Peace. I believe that this is what those 42,000+ people would want me to think about. You see, I believe that they wanted Peace, and I also believe that what we think about, we bring about, and even more so when we add emotion to our thoughts. If you are thinking about war, especially if you have any emotion at all involved with those thoughts, then you are creating more war. If you think about Peace, and feel some love &/or joy in your heart as you think about that Peace, then you will create exactly that. When we feel Peace in our hearts, then we are sending God/Spirit/Universal Mind/the Creator, even Jesus (or whatever other name you choose to use), the clear and distinct message that you want Peace. When we say "I want Peace", or pray for Peace, yet still think about war or hang on to our anger/hatred towards someone we think did us wrong in some way, then we will continue to chase away the Peace and attract more to be angry or hate filled about.

Forgive (for your sake, not for theirs), let go of the hurt, anger, hate, etc. Find the Peace in your heart and live by that Peace. It is more than worth the work. I've been working at this for a very long time and I am making large steps of improvement. I am becoming aware.

As Mahatma Gandhi said:
“Be the change you want to see in the world.”

Peace, real peace, has to come first and foremost from within. Only then can we hope to create peace from without.

I have no veterans to celebrate (look at my post from yesterday) I think without soldiers there would be no wars either. But that's an utopic thought !

We call it Veterans Day here in the USA … but the intent is much the same. I combined Ruby Tuesday, HoTs, and Fun Monday with my Tuesday Veterans Day post at Small Reflections.
Hugs and blessings,

that is a great collage!!